Deutsche Bank ’s troubles continued and on Monday the 26th of September its shares fell more than 7% to their lowest level in decades (close to 10.50, while the close price at the end of the week reached 11.50).

As shown in the chart above, Deutsche Bank has lost more than half of its original value one year ago, and in the last period the catalyst has been the declaration of the head of the German government that said it wouldn’t provide aid to the bank ahead of German elections next year. Deutsche Bank has been generally struggling with the negative interest rate environment in Europe, which acts like a sort of tax on banks, that are effectively charged to hold cash. For example, the European Central Bank (ECB) set depositary rates at -0.4% this past March, meaning that it was penalizing banks that hold excess cash with the central bank. It’s an extreme execution of monetary policy, which includes changing interest rates, much like when central banks decrease the rates to stimulate economic activity. 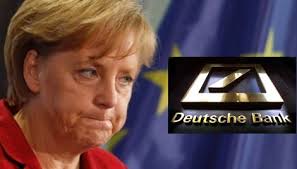 However, the main driver to the decrease in the value of Deutsche Bank stocks has been the leakage of news telling that the US government was seeking up to $14 billion in damages relating to Deutsche Bank’s alleged mis-selling of investments. This amount is far bigger than thought, and all of this means the bank might have to try to raise new money from investors (which could conceivably require support from the German government).

It’s worth noting that many still think the government would support Deutsche Bank if it really needed the help; the alternative would just be too disruptive to the financial system (also note, in any case, deposits up to €100,000 are backed by the government).

Is a rights issue the only way out for Deutsche bank? Citi thinks so…https://t.co/H5QfpskuW8 pic.twitter.com/0V9lCfu7sC

Laith Khalaf, senior analyst at Hargreaves Lansdown, in fact, said: “At the moment it looks like Germany won’t be bailing out Deutsche Bank. If they did it would be quite hypocritical because they have been putting pressure on the Italian Government to prevent state support for their banks.”. But he said Germany’s Government could well change its stance if things deteriorate and Deutsche Bank starts to near the brink of collapse. He said: “If there is a risk to the financial system and it looks like if the whole caboodle is going down if Deutsche Bank collapses, it’s going to be a different situation.”

From Deutsche Bank perspective, it declared on Monday that the bank will solve its own challenges and that the idea of government support was “pure speculation.” Furthermore, it said that it wouldn’t have to raise new money from investors. But many investors clearly think otherwise, considering, as shown from the chart above, that Deutsche Bank’s stock is down more than 50% this year. That, at least partly, reflects a belief that investors think the bank will have to raise new investment, thus diluting the value of the stock owned by current shareholders.

Many have highlighted that Deutsche Bank situation has a lot of things in common with what happened to Lehman Brothers. As for Lehman, the bank’s executives and communications folk are denying they have a problem. In fact, in March 2008 Lehman’s chief financial officer Erin Callan, trying to stem a run on the bank’s shares which had fallen 46pc a day earlier amid fears Lehman was the next Bear Stearns, assured that the bank had “the leadership, the experience, the capital strength and certainly the liquidity to ride out this period”.

Is Deutsche Bank's Lehman moment about to arrive? Credit spread at 500bp and rising… pic.twitter.com/OPv4dZYan8

In these circumstances, with US regulators asking for $14bn (£10.6bn) to settle claims of packaging up and selling off dodgy mortgages, the world’s riskiest bank just got a whole lot riskier.

In the meanwhile, 185 top managers USA has asked European leaders to change the decision about the 13 billions Apple has to pay to Ireland, and a lot of people in Germany are taking the streets and standing united against the TTIP treaty. The economic war between USA and Germany has never reached these levels in the past, and seems not even close to end soon.

As stated by James Moore, part of the reason for the rise of populist demagogues like the odious Donald Trump and his mini-me, Nigel Farage, is the widespread anger and disillusion created by the crisis and the austerity that followed. The siren call of the outsider promising to tear it all down in the name of “the people” has proved seductive to many, even if it is a con.  The problem is the elites these people attack did not suffer in the way ordinary people suffered. In fact now most of the individuals who were at fault for punting all those dodgy mortgages around the world now are not working anymore for Deutsche Bank and have moved to Hedge Funds or other financial institutions, or maybe even they are having a drink on a beach paid by with the bonuses earned at Deutsche Bank.

Deutsche’s fine, wherever it ends up, will be a big number. But ultimately it’s just a number. The bank hands it over, the shares wobble a bit, and then everyone moves on to the next bonus round. The real political problem is the disaffection that these kind of situations will ultimately lead into the crowd, into the people called to vote for political parties that will suggest quick, easy and useless solutions against white collar workers, used as the only real enemy to fight.