You Are Here: Home » Cultura » Crude oil: impact of an increase in the price of the most traded commodity in the world economy (Pt. 1)

We have heard many times sentences like “we live in a globalised world”, or about the so called “butterfly effect” meaning that small causes can have large effects. In finance there are no differences, and the vast majority of financial products are strongly correlated to each other. In this article the most traded commodity in the world, i.e. crude oil , will be examined in depth. In the following paragraphs its correlation with equities will be addressed. In the next article, it will be deepened its correlation with bonds, other commodities and foreign exchanges . The references are included in order to let the reader focus on the topic in case of academic interest or for other financial purposes.
Relevance of oil to the global economy

The recession of the 1970s and 1980s was at least partially generated by oil price shocks, and this fact has been widely accepted by the literature, as confirmed by Aziz and Bakar (2011). From the influential work of Hamilton (1983), Burbidge and Harrison (1984) and Rotenberg and Woodford (1996) among others, these literatures had helped to understand the impacts of oil price shocks on macroeconomic variables. Although recent studies showed that the oil price-macroeconomy relationship has weakened following the collapse of oil prices in 1986 (Lee et al., 1995 and Hooker, 1996), Hamilton (1996) and Hooker (2002) still show that oil prices play a significant role in explaining business cycles and unemployment.
However, as suggested by Rogoff (2006), consensus estimates suggest that the global growth effects of a true oil supply shock (as opposed to the mainly demand driven recent oil price surge) are probably less than half of what they were once thought to be.
Regarding the last decade, it has been a roller coaster for oil prices, a turbulent experience for market participants (Figure 1). The period includes much volatility and two sharp crashes. During the first one, in 2008, the mortgage related bubble has burnt and the Great Recession has started, while in the second, much closer to nowadays, oil prices have fallen from over $100 per barrel in mid-2014 to around $30 per barrel recently.

Global equities
Evidences that stock market indices responded negatively to increases in the oil price in the long run between 1971 and 1980 and again between 1988 and 1999 has been found by Miller and Ratti (2009). However, considering that data were gathered between 1971 and 2008, the expected negative long-run relationship appears to disintegrate after 1999. These findings might support suppositions such as the change in the relationship between real oil price and real stock prices in the last fifteen years compared to earlier years. Besides, other studies, such as Faff and Nandha (2008), confirmed partially the above statements, having found that oil price rises have a negative impact on equity returns for all sectors except mining, oil and gas industries.
However, in recent times, stocks and oil prices developed the tendency to move together, and that fact has been examined by many authors, such as the former chairman of the Federal Reserve Ben Bernanke . Much of the positive correlation shown in Figure 2 can be explained by the tendency of stocks and oil prices to react in the same direction to common factors, including changes in aggregate demand and in overall uncertainty and risk aversion. As demonstrated by Kilian and Park (2009), the demand and supply shocks driving the global crude oil market jointly account for 22% of the long-run variation in U.S. real stock returns. Furthermore, Guesmi, Boubaker, and Lai (2016) showed that the low price of oil in 2014 is caused by reduced oil demand because of the slower economic growth in Chinese economy and the impact of developed world’s drive to reduce carbon emissions on the oil market. 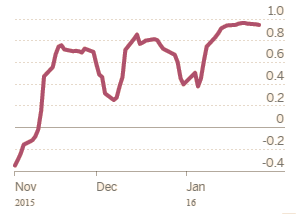 To conclude, there is not much certainty about a future positive or negative correlation between oil prices and stock markets. It is hard to predict whether the positive correlation of the present days will persist even in the medium term, and in this sense, considering the conclusions of many papers, it could be useful to make some macro-economic analysis about future aggregate demand and in overall uncertainty. However, it should be advised, in case of a strong certainty of a raise of oil prices over the medium term to invest in mining, oil and gas industries, provided that these firms have never negatively reacted to an increase in oil prices, not even in the past.

There is no related posts.